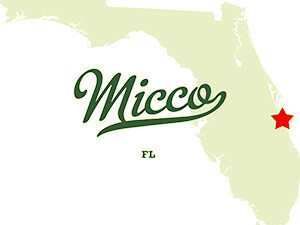 The primary coordinate point for Micco is located at latitude 27.8575 and longitude -80.5108 in Brevard County. The formal boundaries for the Micco Census Designated Place (see map below) encompass a land area of 7.61 sq. miles and a water area of 2.25 sq. miles. Brevard County is in the Eastern time zone (GMT -5). The elevation is 0 feet.

The Micco Census Designated Place has a U1 Census Class Code which indicates a census designated place with an official federally recognized name. It also has a Functional Status Code of “S” which identifies a statistical entity.